Horror is a continuously growing genre within the film industry. Time and time again, new horror movies become the number one grossing films in the box office during opening weekend. But while millions of people flock to see these films, many seem unaware that a majority of these films are based on horror books—and these books are worth just as much attention. 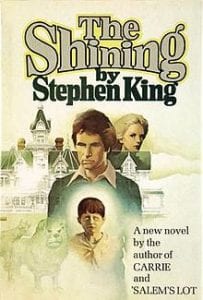 Published in 1977, The Shining was Stephen King’s third novel, and first bestseller. The chilling tale is centered around The Overlook Hotel, a fictional resort set in the Colorado Rockies. The readers are told very early in the book that Delbert Grady, a former caretaker who managed the closed up hotel during the winter, went insane while staying there and killed himself and his family. Jack Torrance, an aspiring writer, is offered the position as the hotel’s next winter caretaker, and moves there, along with his wife, Wendy, and their five year old son, Danny.

Jack and Wendy are unaware that Danny has special abilities, allowing him to read minds and anticipate tragic events. While exploring the hotel, Danny begins to see grisly apparitions about people who had previously died in the hotel. Meanwhile, Jack begins to inadvertently feel the negative forces and emotions within the hotel and slowly begins to grow crazy. The hotel itself slowly influences him to kill his wife and son, and the last few chapters of the book focus on a nail biting cat and mouse chase to the death.

Mary Shelley was only eighteen years old when she first began to write Frankenstein. The story was first published in 1818, and tells the story of Victor Frankenstein, an ambitious young scientist who attempts to create a humanoid-like creature that spans over eight feet tall. Dr. Frankenstein is both shocked and pleased when the experiment is a success, but the creature is so grotesque looking, the doctor flees the scene and his “monster” escapes. A series of murders occurs near where the monster escaped, and Dr. Frankenstein fears the monster has turned into a killer. The monster later finds Victor and demands that he create a companion for him, otherwise the creature will kill Victor’s friends.

Terror and tragedy escalates as Dr. Frankenstein builds the monster’s companion out of coercion. Fearing the future of mankind, the doctor ultimately destroys the creation before it is complete, and the monster decides to seek revenge on the doctor by killing those he loves most.

First published in 1971, William Peter Blatty’s novel is about a twelve year old girl who begins a seemingly innocent friendship with a spirit named Captain Howdy, an invisible entity she communicates with by way of a Ouija board. Overtime, Regan’s mother, Chris McNeill, begins to notice that her daughter is acting very strangely, cursing and claiming that her bed has begun to shake at night. Chris takes Regan to multiple doctors as Regan grows steadily more irritable and violent, but when none of them can determine anything medically wrong with her, Chris starts to suspect that her doctor is actually possessed.

Desperate for help, Chris contacts two local priests to perform an elaborate and intense exorcism on her daughter… but the demon who dwells within Regan is much more powerful than any of them realize. Many people have seen the 1973 film adaptation of the book, but the novel itself is worthy of equal praise.

This iconic gothic horror novel was first published in 1897 by Bram Stoker. It is the origin of the now famous fictional character, Count Dracula. Told in a series of letters and diary entries, the story is about a young solicitor named Jonathan Harker, who travels to Count Dracula’s household in the Carpathian Mountains to assist with a real estate transaction. At first, Jonathan is charmed by the Count’s immaculate manners, but slowly begins to realize that he has become Dracula’s prisoner. Jonathan encounters three female vampires on the premises, which the Count allows to attack Jonathan after Dracula hires a ship to travel to England.

After his arrival, Dracula begins to feed off a young woman named Lucy, who eventually dies from blood loss and becomes a vampire herself. Lucy’s friend Mina happens to be Jonathan’s fiancé, and the couple decide to team up with a man named Abraham Van Helsing to prove that the Count is a vampire, and to destroy the horrifying creature once and for all.

Peter Straub wrote the much acclaimed Ghost Story in 1979, and was later adapted into a feature film in 1981. The story takes place in a fictional town by the name of Milburn, located in New York. Told in alternating points of view, the novel’s protagonists are five elderly men who routinely get together to reminisce about their “glory days” as well as to discuss ghostly tales.

Things go horribly awry, however, when one of the five men suddenly die. Soon after, the remaining four members of the group begin experiencing bad dreams where each of them die as well.

As the story slowly unfolds, it is revealed that the five men killed a young woman many years before, and each begin to suspect that the woman’s spirit has returned to exact her revenge on each and every one of them.